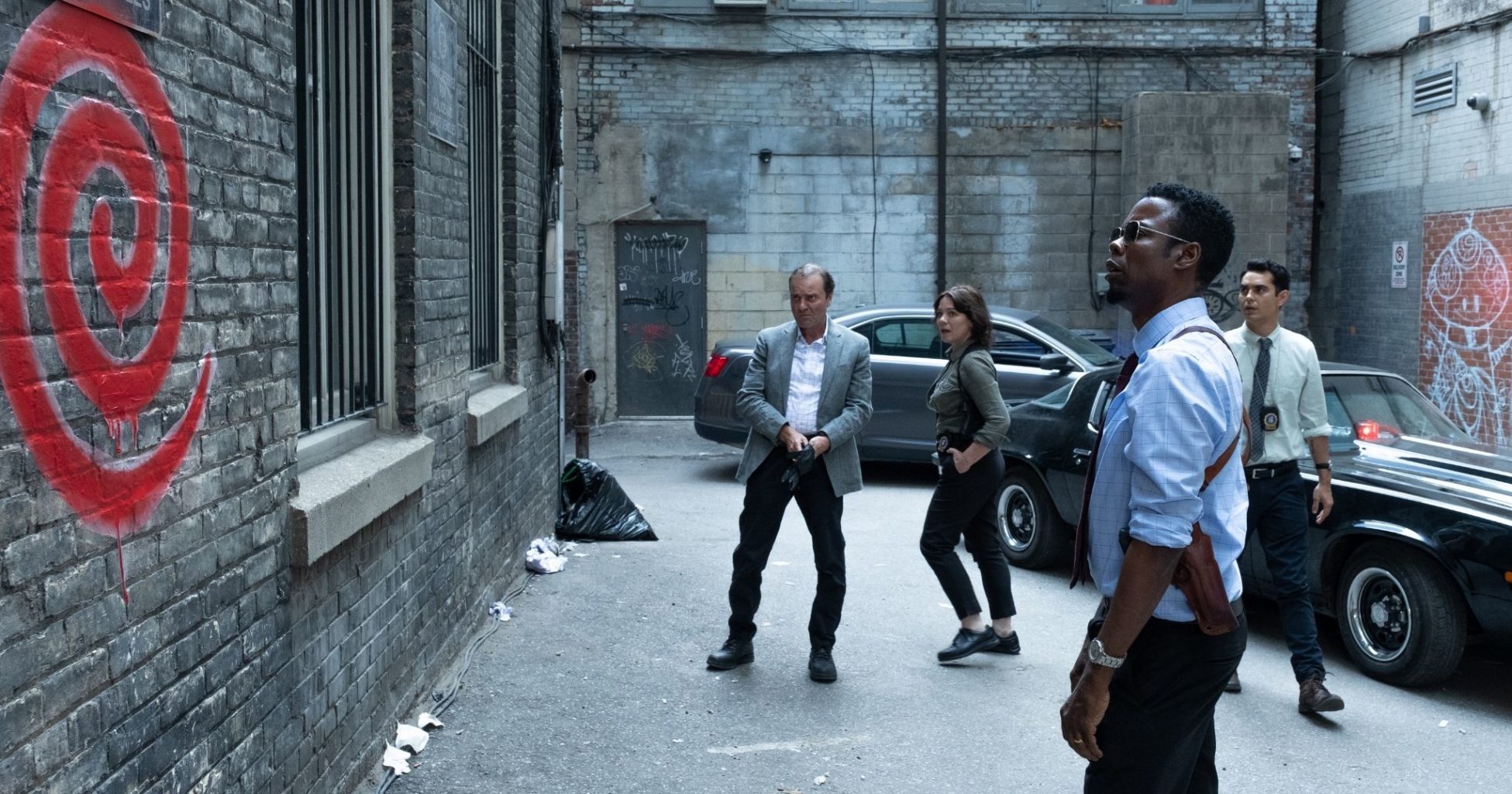 A horror movie receiving many sequels is far from uncommon in the world of cinema. In fact, several of the most iconic frightening films have received countless continuations. The unfortunate truth is, most fail to live up to the original. Directed by Darren Lynn Bousman, Spiral: From the Book of Saw tries its best to resurrect a deceased franchise by taking it in a new direction. While the results are largely entertaining, this release is mostly a mediocre thriller wearing the mask of a Saw movie.

Following the gruesome murder of a policeman, Detective Ezekiel Banks finds himself on the trail of a killer utilising the grisly techniques of the long-dead John Kramer. Chris Rock plays the aforementioned protagonist and is joined by Max Minghella, Marisol Nichols and Samuel L. Jackson.

Spiral’s biggest flaw is that it didn’t need to be a Saw film. It almost feels like a separate story that has been injected with complex traps and creepy pig masks. Because of this, it doesn’t employ the strengths of the franchise nor does it exhibit the same twisted morality. Sure, there are deadly contraptions but they never feel as inventive or purposeful as those that came before. Furthermore, while there are some twists and turns in the narrative, they never really feel earned. Neither does the social commentary element that is essentially the backbone of the picture. The movie clearly wants to say something about the US police system but struggles to follow through with its intentions. This is not the worst Saw film by any stretch but it might be the most average. Despite this, it is still fairly entertaining, primarily due to a great lead performance by Chris Rock.

Driving the movie forward, Rock delivers the believable dramatic acting that the tone deserves. There are a few doses of the comedy he is famous for but for most of the runtime, he is a hardened detective. As we observe him reaching every narrative beat, he helps to elevate the somewhat intriguing mystery that is being unravelled. In fact, with each new discovery, viewers will likely be interested to see where Zeke ends up. Although the film closes with more of a whimper than a bang, the fuse that runs towards it has enough of a burn to keep you invested.

With the positives in mind, Spiral: From the Book of Saw is nevertheless likely to disappoint many fans of the franchise. In an attempt to chart its own course, it forgets to honour the legacy that came before it. There is still some entertainment to be had, but the movie’s notable shortcomings make it a hard one to recommend.