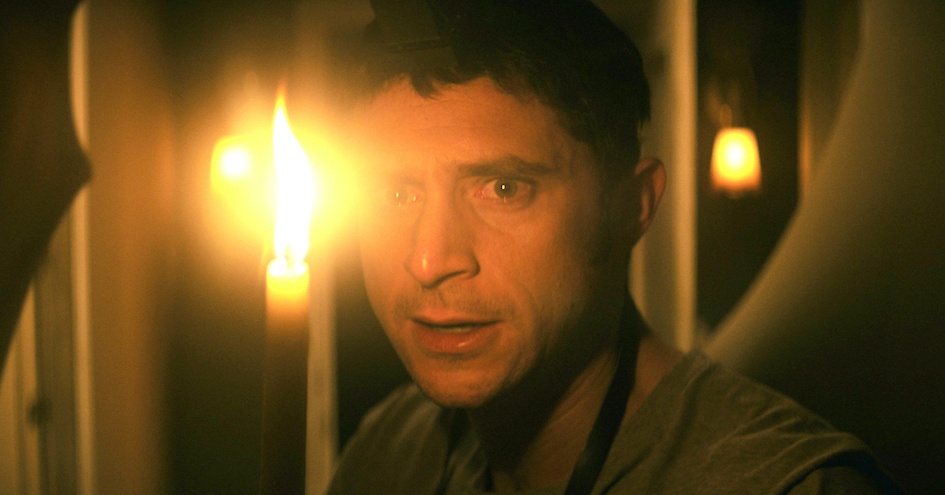 A simple premise goes a long way. Especially within the genre of horror, a small-scale concept can be deeply rewarding if a filmmaker is confident enough to commit to it. Written and directed by Keith Thomas, The Vigil sets up a wonderfully limited plot but falters as it tries to expand beyond its boundaries. While a more focused approach would have been beneficial, the final result is still conceptually interesting and often incredibly suspenseful.

Agreeing to take on the ritualistic role of a shomer, Yakov must spend the night with a dead body. As the hours pass, things quickly become far more sinister than expected. The aforementioned lead is played by Dave Davis, and is supported by Lynn Cohen and Fred Melamed.

The core idea of The Vigil is fantastic. Exploring Hasidic traditions, the film has a foundation that is perfect for horror. The initial moments of tension are superb, choosing simple sounds and silhouettes to convey a sense of building dread. Enhanced thanks to Dave Davis’ great performance, these sequences will have you sweating as they drive us deeper into the night. Unfortunately, even with a solid set up, much of this tension dissipates as the movie chooses to implement cheap jump scares and unnecessary tropes.

As previously mentioned, there are quite a few anxiety-inducing scenes that are truly creepy. However, most of them sadly end in jump scares that are not only predictable but also ineffective. Sure, the loud music may startle you but any previously created fear is lost. What makes this worse is the choice to reveal certain imagery as the runtime progresses. Shadows are far scarier than something visually grotesque. What we imagine is lurking in the dark will always be more terrifying because our imagination is more twisted than anything that can be depicted on screen.

The Vigil is a film that desires to be deeper than just a haunting. In fact, the story is very metaphorical. Facing an unwelcome presence, Yakov also battles his own past regrets as the morning inches closer. This fleshes out his character but comes via the method of flashbacks that completely destroy the tension of many sequences. A subtler approach would have gone way towards creating both a scarier and better-made movie overall.

As both writer and director, Keith Thomas should be proud of the successes of this feature while still acknowledging the mistakes made. He is clearly a good director with a lot of potential. Discussing the production further, Zach Kuperstein has done a fine job with the cinematography, utilising many shades of disquieting green. Although, a notable technical flaw must be addressed when it comes to the score. The music by Michael Yezerski sounds as generic as you can get in horror. Moreover, it is also widely inconsistent, sometimes darting between genres in a haphazard fashion.

In an alternate reality, The Vigil is one of the best horror releases in years. Unfortunately, a few narrative and filmmaking choices prevent it from being as great as it could be. Despite its lost potential, the movie still holds merit and is certainly worth watching for the frightening scenes that utilise all its strengths.