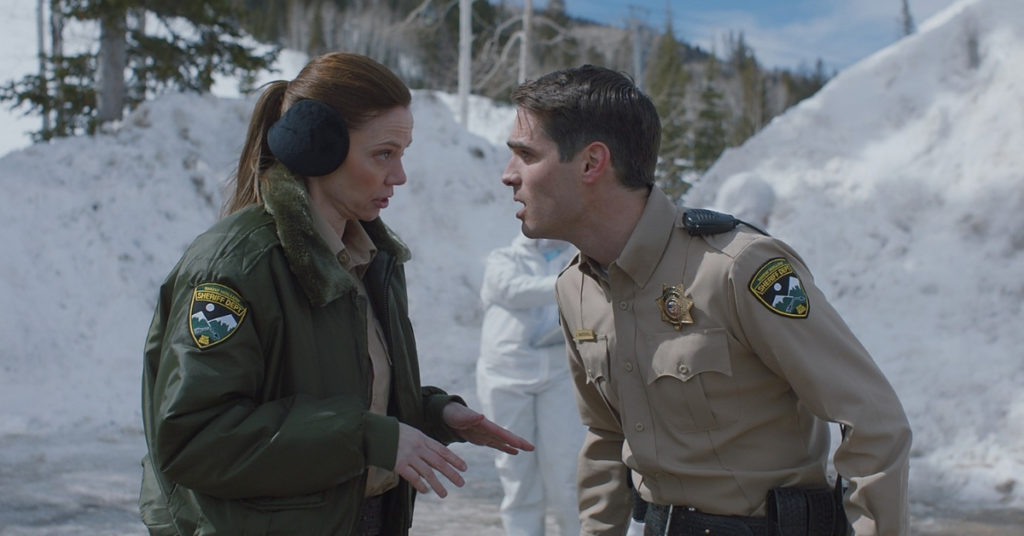 When a director fuses genres, the risk of failure tends to increase tenfold. It is hard enough creating a film focused on one avenue without injecting other elements from a whole new perspective. Thankfully, even when the end product is not perfect, there is often a lot to like within these cinematic mash-ups. Written and directed by Jim Cummings, The Wolf of Snow Hollow is a new horror/comedy. Although the movie is far funnier than it is scary, the end-product still manages to be an enjoyable, albeit flawed, tale of mystery.

The story presented to us follows a small American town, gripping with the rising death toll dealt by a supposed Werewolf. As the bodies begin to pile up, an eccentric police officer attempts to calm the local paranoia as he hunts down what appears to be a killer beast. The cast is led by the aforementioned Jim Cummings and is supported by Robert Forster, Chloe East and Riki Lindhome.

Although the title and premise suggest a gruesome affair, the biggest strength of this picture is its comedy. The lead character is a hilarious individual that will keep you smiling throughout. He is over the top and verbose, allowing for a fun ride from start to finish. In this way, the movie is more of a parody when it comes to the horror elements. Tropes are played with and clichés are used deliberately as the story offers a unique twist on the creature feature niche. Furthermore, there is a successful thread of intrigue that flows throughout the fabric of the film and it is this conundrum that concludes with a remarkably tense scene in the climax. Regrettably, while there are many positives, the movie does have some notable flaws.

With more successful scares and a little less of the silliness, the quality level of the film would be more noteworthy as it would be a true genre-blending success story. Moreover, the extent of the humour hampers the drama that is attempted as it becomes difficult to relate with our protagonist when he is such a preposterous person. While he works really well when laughs are the intent of the scene, a feeling of whiplash is often felt when the movie tries to get serious. Despite this, the technical attributes must still be commended in lieu of the errors.

Script aside, the release does flourish when it comes to the filmmaking. Jim Cummings does a great job with the direction and the rest of the production team deliver a well-made product. However, special commendations must be made to Natalie Kingston, the cinematographer. The movie is photographed beautifully and is absolutely gorgeous to look at. The frost white snow of the area is the perfect backdrop for what is often a picturesque frame of film.

Ultimately, this is a unique independent feature that is not perfect by any stretch of the imagination but still does a lot for those that a want a fun viewing experience. At less than 90 minutes in length, the story does what it needs to do and concludes without overstaying its welcome. For those looking for a good night of funny mystery, The Wolf of Snow Hollow might be the pick to make.