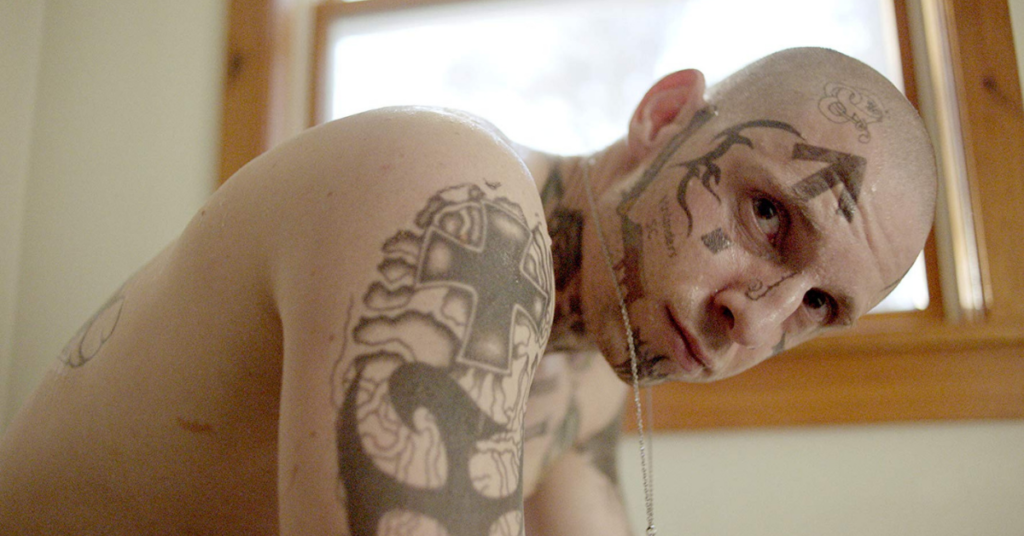 Basing a movie on true events comes with many challenges. Filmmakers often have to make choices based on what is more important, historical accuracy or the cinematic story they are trying to tell. The right answer is often up to the viewer, with them deciding if they accept the presentation displayed in front of them. Written and directed by Guy Nativ, Skin is a biographical release that manages to be a flawed but effective drama about a man’s unlikely journey from hate to redemption.

The movie follows Bryon Widner, a white supremacist coming to grips with the painful regret of his past decisions, attempting to leave the dangerous group that he has been a part of for many years. Jamie Bell stars as the aforementioned lead, supported by Danielle MacDonald as love interest Julie, Mike Colter as an unlikely helper named Daryle and Bill Camp as Fred Krager, the prejudiced gang leader that took Bryon in as a teenager.

Unfortunately a deeply relevant topic, the film does a good job of positioning us within the nest of white supremacy in modern America. The villains of this picture are not moustache-twirling baddies but instead are sinister human’s that sell the product of family to create their weapons of hate. This is far more terrifying as these racists are not monsters in the dark, but rather twisted people that live amongst us in the light. While the narrative sometimes struggles to dive deeper into this hostile mentality, it does enough to create the foundation for the strong character that starts the tale entrenched within it.

Jamie Bell is superb in his role. He offers an emotional insight into a complex individual that many will struggle to support. Showing that those that do evil acts are not unsalvagable, every moment he is on screen is mesmerising to watch. Furthermore, the physicality of his performance allows him to communicate an ongoing internal battle even when he is silent. Unfortunately, while the entire cast is very good as well, the abundance of side-characters causes the movie to sometimes lose its focus.

Being based on true events, it is likely that there were many people involved in this man’s life. The film tries to compensate for this by attempting to provide attention to the entire ensemble. In doing so, it not only fails to flesh out the sub-characters in a successful way but also negatively impacts the overall story by taking time away from our protagonist. The final product must be commended for being as good as it is despite these flaws, even though it could have been something truly special with a more concentrated script, allowing the important elements to flourish completely.

The movie’s technical aspects are solid overall. The pacing and structure are rocky in places but is largely good enough, as is the music and cinematography. Although not noticeably brilliant in any way, the filmmaking is as functional as it needs to be.

Although disappointing in its failure to reach its full potential, Skin is effective in delivering a fantastic lead performance above a solid foundation. We will not be looking back at this as one of 2019’s best but that does not mean that it should be dismissed. Telling a real story that is certainly very interesting, this is a film well worth a watch.