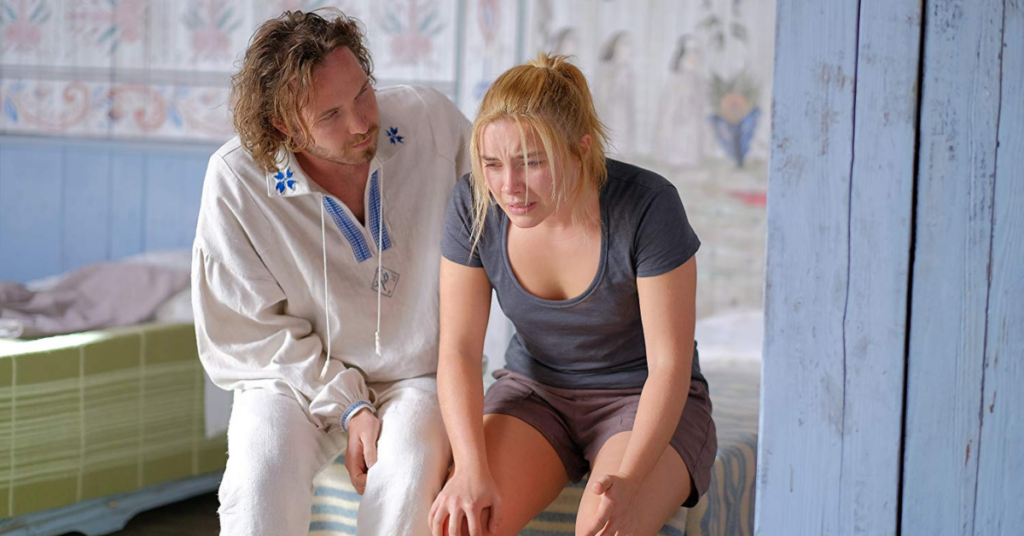 With Hereditary, Ari Aster proved that he was a force to be reckoned with when it comes to modern tales of dread. Delivering what many consider to be one of the best horror films of the last decade, the anticipation for his next picture has been extremely high. Once again written and directed by Aster, the new release Midsommar proves to be an excellent follow-up, presenting a character-driven experience that uses a horrific backdrop to tell a deeply human narrative.

The story depicts Dani, a young woman on the brink of a breakup with her boyfriend Christian. After enduring a tragedy, she joins her partner and his friends on a trip to a Swedish festival, soon realising that the pastoral paradise is far more sinister than previously thought. Florence Pugh and Jack Reynor play the aforementioned couple, supported by Will Poulter, William Jackson Harper and Vilhelm Blomgren.

This film is not scary in the way people may expect. Shocking, uncomfortable and grotesque at times but never frightening for the viewer. However, this was clearly not the intent. Beginning with one of the heaviest pre-credit sequences you will ever see, what we witness here is a movie built to tell a character-first fairy tale of sorts, propelled by an ever-present cult throughline.

At its core, this is a film about a grieving woman facing the inevitable doom of her relationship and trying to find what she has been missing. As such, the story is a slow dive into the psychological depths of our protagonist Dani. While the movie does inject moments of gore and violence, it is all used in service of the natural conclusion that we eventually reach. It takes its time, spending many minutes simply existing alongside our cast, in order for us to relate with everything that happens, no matter the insanity. The foundation for these strengths are the superb performances, specifically what we see from Florence Pugh.

The entire cast is good in their roles. From the residents of the festival’s homeland to the group of friends we follow, everyone plays their part well. Furthermore, Jack Reynor’s execution of the flawed boyfriend is refreshingly subtle and restrained in a way that feels truly real. While there are one or two characters that seemed a little unneeded (Will Poulter’s for example) none detract from the overall product. With all this in mind, it is the lead actress that is the standout star.

Florence Pugh is a powerhouse in her role, establishing a person under immense psychological pressure, trying not to crumble beneath it. Able to show a person battling to hide their emotions in one scene and unloading it all in the next, she is simply remarkable throughout. It is because of this that there is some disappointment to be had with her involvement in the third act, creating one of the few negatives of the film.

During the last section of the movie, Dani is left in a period of stasis until the final moments. Her development is paused somewhat as we shift attention to other parties. While this newfound attention does a great job of progressing sub-stories, the overall vision of the movie loses its focus a bit. This compounded with some pacing problems leaves us thinking that they could have tightened the narrative and edited the run-time down for optimum efficiency.

This will undoubtedly be one of the most well-made films of 2019. On a technical level, practically every element is exceptional and efficient. The score by Bobby Krlic is both haunting and beautiful, and the cinematography by Pawel Pogorzelski will leave you feeling like you just escaped a nightmare trapped in a dream. Above it all, the filmmaking of Ari Aster must be commended entirely. An auteur in every sense of the word, there are very few directors like him working today.

Although some fine-tuning could have made this movie even better, the piece of cinema we have before us is a terrific one indeed. Purposefully building its message through the lens of a twisted festival, Midsommar is an outstanding film. Unlike anything released in a very long time, this is a character-driven experience that viewers will likely never forget.