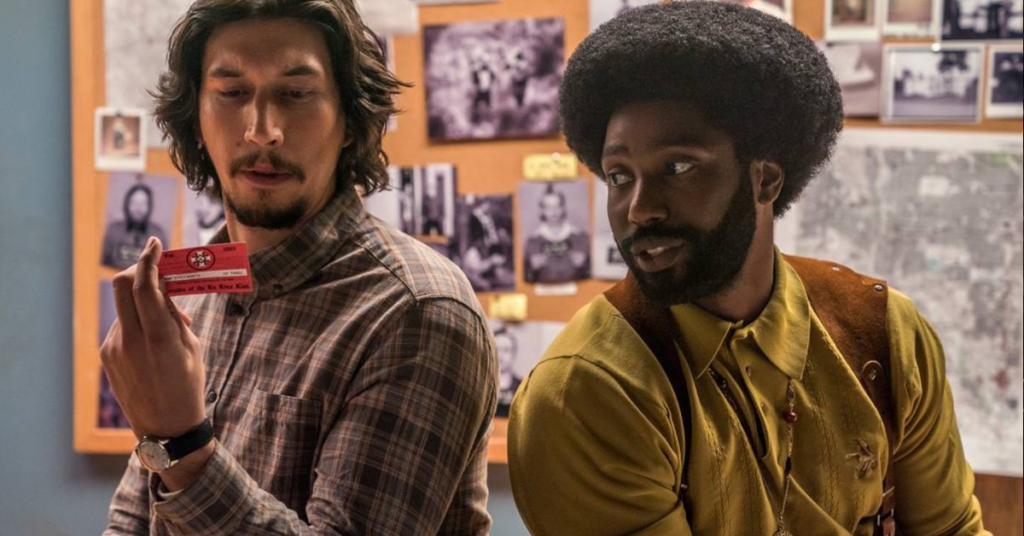 Based on a true story, this Spike Lee directed film tells the tale of Ron Stallworth, a black detective that infiltrated the ranks of the Klu Klux Klan in the 1970’s. John David Washington plays the aforementioned individual, who as the first black detective in the Colorado Springs police department engaged in a remarkable investigation that forms the basis for this narrative.

A story such as this needs to be constructed the right way. With race and racism being the center themes in the picture, the film maker needs to make sure these elements aren’t depicted haphazardly. While others would have represented these events in an strict serious manner, the tone that Spike Lee was able to maintain is truly exceptional. The final product has many dramatic elements indeed, but it is the humour intertwined within it that enhances one of my favorite pieces of cinema this year. It is not often that a theatre is dead silent and tense in one scene and laughing the next, but Lee manages to do this remarkably.

An injection of comedy makes perfect sense considering the real life story was likely bizarre for those that lived through it. Furthermore, John David Washington does a great job as the protagonist and is able to carry the weight of the deeper scenes while also having the comedic timing to offer laughs. In truth, the entire cast does a fine job alongside him but specific props must be given to Adam Driver who plays a fellow cop that posed as Stallworth’s real life proxy when going undercover in the field. The way that Driver is able to convey vivid emotions with just a few words (or no words at all) is incredible. He is one of the most talented actors working today and this movie adds another notable performance to his portfolio.

On the opposite end of the scale, the actors portraying members of the Klan rise to the occasion as the film’s antagonists. One or two individuals aside, the acolytes of this movie’s KKK do not follow the cliche depiction that you may expect. They are for the most part, normal people on the surface. Normal people that you could imagine meeting and even getting to know without seeing their hateful nature. This was so refreshing as most real world racists are not mustache twirling villains but rather wolves in sheep’s clothing that only reveal themselves when they are among their own. I didn’t realise this completely when I left the theatre, and even remarked to my fellow patrons how Topher Grace was a poor choice for the Grand Wizard of the KKK. In the days since my screening, I have grasped how perfect he was. His subtle performance of the average looking David Duke is superb once you understand that this is what the real person was like.

All these ingredients work astonishingly well together as the picture moves towards its climax via a route that is both enjoyable and impactful. It is this ending that I feel needs to be noted as Spike Lee takes BlacKkKlansman to places that I never contemplated it would. It concludes with a punch in the gut that needs to be seen to be believed.

Although I adored this film, there were a few facets that I would consider as small negatives. The run time is a bit long and there are a few moments in the third act that drag a bit. I would have also liked a more prominent and diverse score as I felt a few scenes and sequences could have used distinctive original music to support them.

Overrall, BlacKkKlansman is a movie that organizes various subject matter in way that adds entertainment without downplaying the severity and importance of the events. Without getting too political, it is a film that holds deep significance to modern society and race relations. I would recommend this as a must watch to everyone as it is not only a fantastic movie but a powerful one as well.