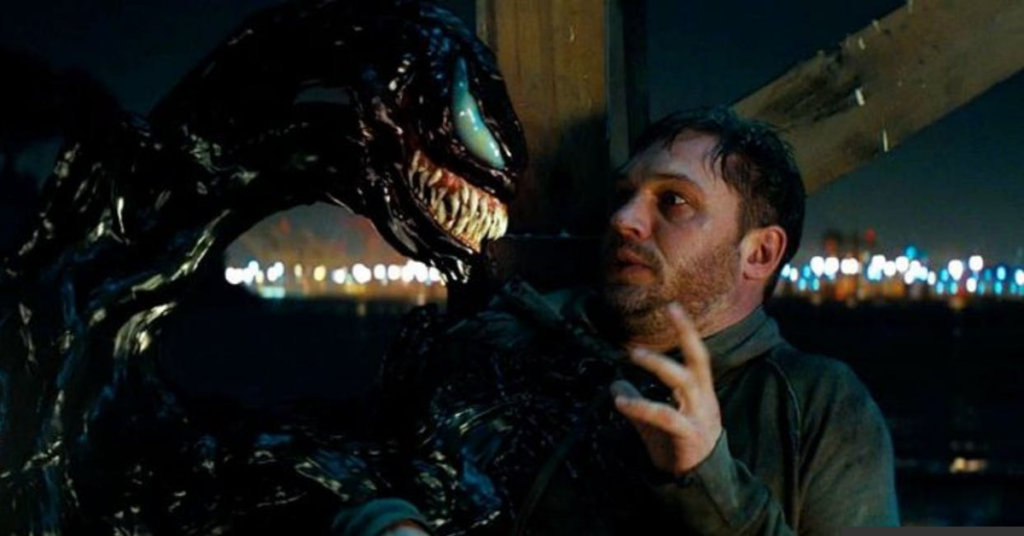 Introduced in the 80’s as “The Alien Costume” for Spider-man, Venom has since become a fan favorite villain for hardcore and casual comic fans alike. This popularity helped build a strong desire to finally see this character brought to life in live action. After Sam Raimi’s failed attempt to do this, the yearning for a proper depiction only grew stronger. With the era of comic book films now in full swing, director Ruben Fleischer has brought us a heroic interpretation starring Tom Hardy that offers mixed results.

This iteration of the Venom story has no involvement from Spider-man or the Marvel Cinematic Universe (MCU) at all. Instead, we are told a tale of an alien parasite (or symbiote) that is brought to earth by a suspiciously run genetics company and how it eventually finds its way to our protagonist. This hero (or anti-hero) being renegade journalist Eddie Brock, played by Hardy. The leading cast is rounded out with Michelle Williams as love interest Anne Weying and Riz Ahmed as Carlton Drake, the dubious head of the aforementioned genetics company.

This is not a great film at all. It has major tonal problems, the dialogue is very bad at times and the story itself is not notable in any sense. Furthermore, it is a movie that has an incredibly generic villain and largely awful CGI. Michelle Williams is totally wasted in her role and Riz Ahmed gives a performance much weaker than the talent we know he has. There is a whole lot to dislike here.

Despite these flaws, Venom is a film that I enjoyed quite a lot. This is certainly not the Venom that comic book fans have been asking for. It is goofy, funny and it feels like a picture that should have been made in the early 2000’s. It feels like a relic of the pre-MCU era, and I have to admit that this does give it a lot of charm.

This is very much a film split into two parts. The first being a rather slow development into the character of Eddie Brock. It is the appearance of Venom in the latter half that I found a shift into a much more enjoyable tone. This is where we are bore witness to the relationship between Eddie and Venom, which starts to play as a pseudo buddy flick. The duo speak to each other frequently and their banter is incredibly entertaining to watch. It is very silly at times and there are even moments where I wondered if the director intended for me to laugh when I did. However, the connection between Eddie Brock and Venom works really well. This component is by far the very best part of the film, the main reason being Tom Hardy’s performance as both Brock and the voice of Venom. Hardy carries this movie on his back. Without his performance, it likely would have turned out completely disposable.

On paper, I can see why so many critics have declared the film rotten. However, I found the positives that are present to be enough to carry this to being worth a watch. If I used a ratings system, I would certainly consider this to be a fresh feature. In the days since my screening, the negatives have certainly popped into my head often. Though, whenever they do, I tend to think of another great moment. If you go into this with an open mind, not looking for a comic accurate version of this character, you are going to have a lot of fun. Despite a truly terrible post-credit scene, this is a movie that I hope gets a sequel. Who knows, maybe we will one day see this version of Venom integrated into the Marvel Cinematic Universe. With a little work building on the good components, Tom Hardy’s Venom may be here for the long run.