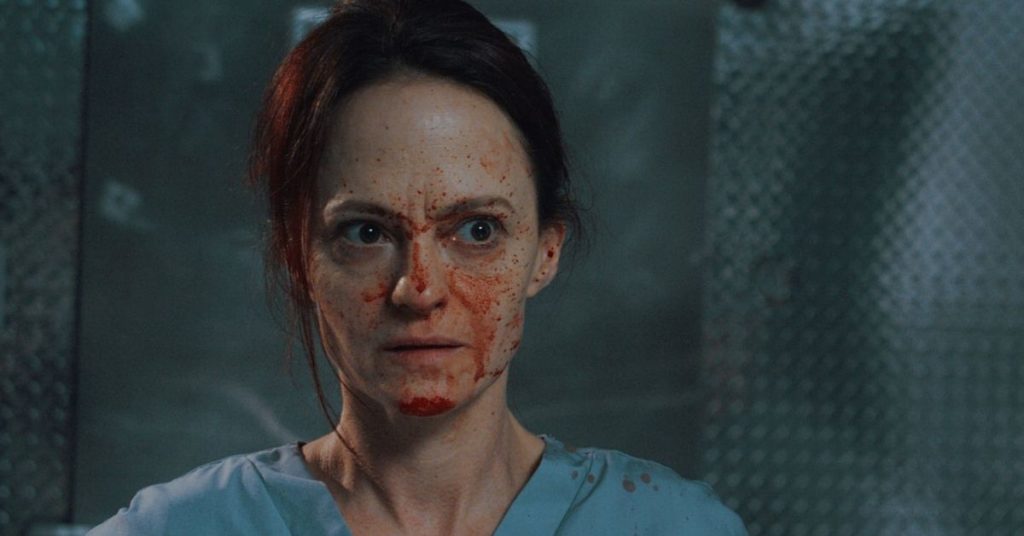 Amidst a world of deadly serious dramas and fun-filled blockbusters is the smaller niches that aim for a different cinematic skew. Unique and honest in their purpose, it is often far more difficult to find success with movies that don’t really appeal to the mainstream. Directed and written by Brea Grant, 12 Hour Shift is a black comedy that uses the strengths of the genre very well, even if it clearly will not appeal to most. Confident in its sarcastic through-line, this is a film that will be a quick and enjoyable watch for many, despite the fact that it doesn’t reach the chaotic heights it desires.

Under pressure from an organ trafficker, a drug addicted nurse must work with her mindless cousin as they attempt to find a suitable kidney. Angela Bettis is our distressed lead, supported by Chloe Farnworth, Nikea Gamby-Turner, Kit Williamson, Dusty Warren and Mick Foley.

12 Hour Shift is a film that wants to be a descent into blood-soaked madness. It attempts to utilise dark humour in a way that elevates the picture beyond unrelenting despair. While it doesn’t achieve all its goals in this regard, it still manages to be an incredibly witty affair. The jokes in this script often land very well in their scenes, contrasting effectively with events unfolding. The characters that employ this comedy work admirably too, allowing for just enough silliness without going over-the-top. In this regard, the performances of the cast must be commended for their absolute efficiency.

As Mandy, Angela Bettis is certainly equipped to convey the range of emotions that her journey requires. While some of her writing is a little inconsistent at times, she thankfully pushes beyond any limitations to deliver a role that is embued with a sorrowful essence. Furthermore, she is able to successfully blend the downhearted moments with the sometimes goofy environment. Unfortunately, the rest of the cast don’t display this dichotomy but still provide us with the flavour that the narrative requires.

The direction by Brea Grant must be congratulated when you consider the limited budget and sets that she was working with. This may not be a breakout release by any means, but she has still proved to be solid in her filmmaking.

In plain English, 12 Hour Shift is best described as simply good. It gets a lot of things right while still missing some targets. At 86 minutes in length, it makes its mark fairly well and offers enough to entertain most fans of black comedy. If you can’t make your mind up on tonight’s viewing, 12 Hour Shift might be the easy watch that you need to pick.