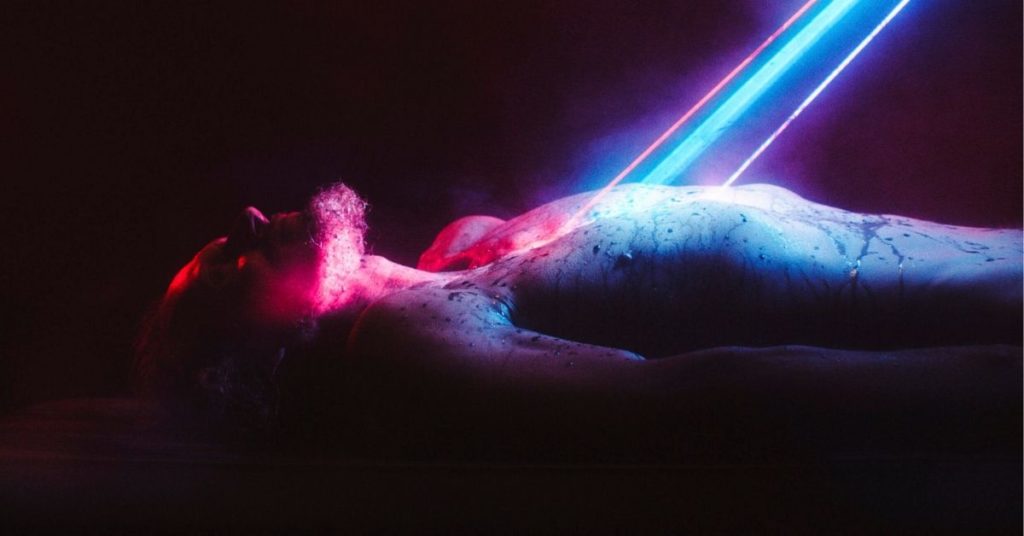 When traditional narrative rules are disregarded and a filmmaker decides to offer an experiential feature, the risk of failure often increases tenfold. In order for the movie to be successful, the imagery presented needs to have a purpose. Thankfully, writer/director Ryan Kruger seems to understand this quite well. Fried Barry is a phantasmagoric new film depicting a psychotic descent into neon-dipped South Africa.

The story follows Barry, a drug-addicted low-life who, after getting abducted by aliens, goes on an adventure through a world of drugs, sex and violence. The titular character is played by Gary Green, with a supporting cast that includes Chanelle de Jager, Bianka Hartenstein and Sean Cameron Michael.

If you are looking for a dialogue-heavy film filled with character arcs and plot twists, then you have come to the wrong place. It is a good thing that Fried Barry is not that kind of picture. It has a clear impetus and delivers in the only way it knows how. This is a movie that feels like a drug-trip in many ways. Designed to make the most of visual storytelling, the events that unfold will certainly drop the jaws of many viewers. While the narrative does reach a point where it seems to be morphing into a more structured format, that is quickly disregarded as the movie is not made to be conventional by any measure. This confidence is for the better as very few releases are able to transform your expectations in such an effective way.

With Gary Green as our main focus, the hallucinatory hallways we travel down are well-supported by his lead performance. There is no need for Oscar level dramaticism here but his brain-washed physicality works well for the film’s set-up. Truthfully, his acting is a rather weak pre-abduction, but his odd appearance makes him completely believable as an individual who has been dealt a terrible hand in life. The actors alongside him are serviceable for the most part but a special commendation must be made for Sean Cameron Michael. As Ronald, his short appearance is endlessly memorable and incredibly acted.

Beneath the bright lights and the grimy shell is some interesting meaning that seems to be conveyed by the filmmaker. Ryan Kruger is clearly trying to send multiple messages with Fried Barry, including obvious commentaries on society and South Africa in general. With many of them up to interpretation, this is a tale that will surely be analysed intensely.

When it comes to production, the director has clearly surrounded himself with some skilled talents. The music by Haezer is stylishly sublime and the cinematography by Gareth Place is undeniably gorgeous in one moment and disgustingly beautiful in the next. If the score and photography were poor, the film would be dead at the start line. Thankfully, this was not the case at all.

In some ways similar to Nicholas Cage’s Mandy, Fried Barry is a mind-melting injection of cult-destined cinema. A movie like this would never work well at a regular theatre but it is this fact that proves its success so well. Offering something completely different from the mainstream, Fried Barry is perhaps best described as an experience that you will never forget.