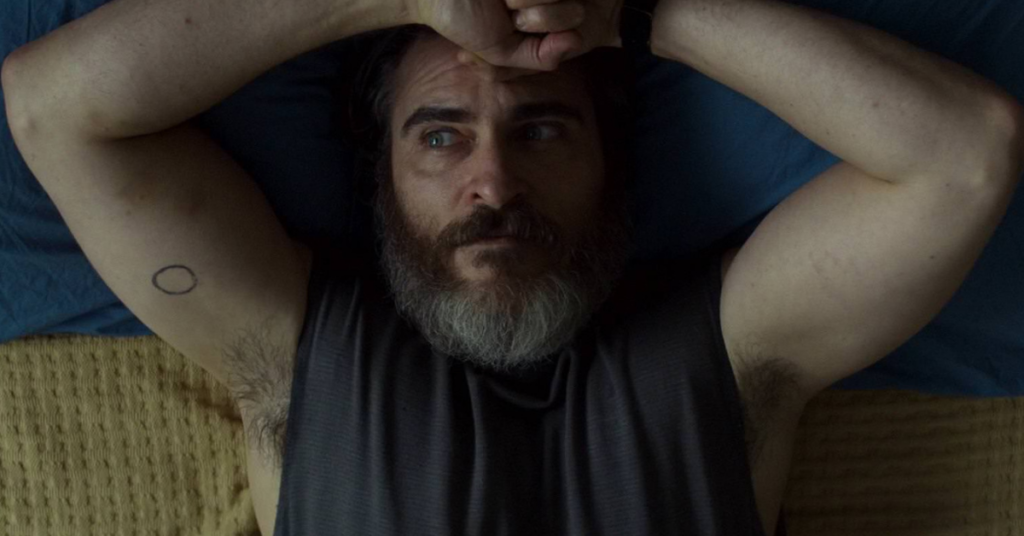 Within an era of loud blockbusters and tent-pole comic book releases, small scale cinema has allowed for a refreshing gateway into enthralling stories and layered characters. While big films have their place and are often very enjoyable, a more emotionally driven story will frequently leave a bigger impact on fans of film. Thankfully, we have been treated to many examples of this in recent years. Directed by Lynne Ramsay and starring Joaquin Phoenix, You Were Never Really Here fits this category perfectly, offering psychological journey that delivers a deeply moving experience.

You Were Never Really Here follows Joe (Joaquin Phoenix), a hired gun that has to deal with his traumatic past as he rescues trafficked girls through any means necessary. Employed to save the daughter of a politician, Joe is forced to go down a rabbit hole of corruption and abuse as he struggles with his own psyche along the way. Phoenix is supported by Ekaterina Samsonov as the aforementioned girl and Judith Roberts as Joe’s mother.

At its core, this is a film about violence. It prioritises its effects more than the acts themselves and in doing so is able to position the audience within the mind of its protagonist. Through the use of brief yet impactful flashbacks and an incredible lead performance by Phoenix, we are borne witness to an illustration of the depressing consequences of violence that many of us do not see. Brutal  despite displaying little gore, we are instead presented with a restrained look into the dark reality of human behavior.

Taking a slow burn approach, we uncover the crushing truths of this tragic tale piece by piece. Due to the superb direction and screenplay by Ramsay, this is a picture that believes in the viewers intelligence, allowing us to follow Joe through his journey while we learn about the backstory that has lead him to become this man in constant suffering. I must once again mention Joaquin Phoenix’s subtle acting that remarkably depicts an individual with a seemingly normal facade, stuck within a constant cycle of pain and torment.

Tackling topics such as these can go awry when not handled with honest sensitivity. Thankfully, Ramsay displays a true understanding of this subject and manages to portray the dark truth of abuse (and its ramifications).

The technical aspects of the film acts as the perfect foundation for the character study above it. The cinematography by Thomas Townend grounds everything in a convincing world that is unfortunately believable in every way. Furthermore, one of the most notable elements that needs to be commended is the fantastic score by Jonny Greenwood. The music is able to seamlessly transition from the traditional orchestras that occur throughout, to the synth driven beats that rumble as the fabric of many pivotal scenes.

At only 90 minutes in length, You Were Never Really Here is able to be one of the most impressive pieces of cinema in recent memory. This is not a film for everyone, its dark and depressing nature will leave many feeling negative. Nevertheless, many of us will be able to find the artful beauty that permeates throughout this release. This is a movie that wants us to be moved by the gloomy journey of its protagonist. Made with care and purpose, You Were Never Really Here is able to do this with astounding effectiveness.